"First came BMI. Now comes hypertriglyceridemic waist - a cheap and simple way to identify people at increased risk of heart attack due to excess abdominal fat, even if they do not look obese. In a study published this week in the Canadian Medical Association Journal, researchers from Quebec City's Laval University are reporting that a large waistline and high triglycerides - a type of blood fat - substantially increase the risk of coronary artery disease in both men and women" - Canada.com
No comments:

"The European Cook Book is a unique collection of mouth-watering and culturally diverse recipes provided by the European Society of Cardiology National and Affiliated Societies. More than 40 tempting 3-course menus from around the world, combined with a comprehensive, but easy-to-understand section about the cardiovascular system, conditions which affect it and tips for improving and maintaining a healthy heart"
No comments:

"As the only national charity solely concerned with helping everyone affected by stroke, The Stroke Association recognises the huge and overwhelming impact a stroke can have. A host of celebrities honoured the achievements of stroke survivors at a star-studded Life After Stroke Awards in Central London on Tuesday June 15, 2010. Outstanding stroke survivors, carers, volunteers, major donors, corporate supporters and health professionals from across the UK were presented with their awards by a number of famous faces. This year's winners ranged from a 15 year old girl who is battling back to fitness following a devastating stroke at the age of 12, to a 70 year old lady who spent five years recovering from her stroke before setting up her very own local stroke club. There was a total of eleven Life After Stroke Awards dished out at Claridge's Hotel in what proved to be an emotional day for both winners and guests alike. The Life After Stroke Awards were hosted by DJ Neil 'Doctor' Fox with other celebrity guests including fashion designer Gareth Pugh, TV health expert Dr Hilary Jones, Welsh rugby star Michael Owen, acclaimed businesswomen Karren Brady and Hilary Devey, and actors Rupert Graves, Wendi Peters and Michelle Collins. Over 220 people from across the UK were nominated for a Life After Stroke Award in 2010. The Life After Stroke Awards 2010 are sponsored by LighterLife and Next"
No comments:

Email ThisBlogThis!Share to TwitterShare to FacebookShare to Pinterest
Labels: Stroke

"Researchers at the University of Adelaide found that dark chocolate "significantly" decreased blood pressure in subjects with hypertension. The benefits stem from chemicals called flanavols, which are present in high quantities in cocoa beans. The chemical stimulates the production of endothelial nitric oxide, which causes blood vessels to dilate. The research concluded that eating food high in flanavols could have an effect on blood pressure equivalent to that produced by 30 minutes of exercise. But the study stopped short of recommending the replacement of hypertension drugs with a chocolate diet. The sugar and fat found in the snacks could have a harmful effect on the heart, they said. "
No comments:

A five-year study aimed at finding ways to reduce some complications of diabetes tried several approaches but failed to reduce the risk of heart attack and stroke. But the study did identify some effective ways to reduce common vision, kidney, and nerve-related problems
No comments: 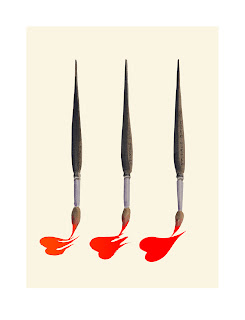 "The British Heart Foundation will be celebrating its 50th birthday next year. To mark this occasion, a fantastic array of leading contemporary British artists, including Sir Peter Blake, have created original works of art on the theme of 'Mending Broken Hearts'"
No comments: