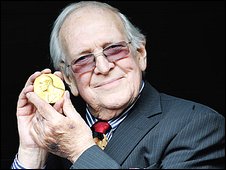 Nobel Prize-winning scientist Sir James Black has died at the age of 85. Sir James was considered one of the great Scottish scientists of the 20th Century and is credited with having invented beta-blocker drugs in 1962. He was born in Uddingston, Lanarkshire, grew up in Fife, and studied medicine at St Andrew's University. In 1988 he won the Nobel Prize for medicine and was given the UK's highest honour, the Order of Merit, in 2000. Beta-blockers now play an essential role in the treatment of angina and heart attacks